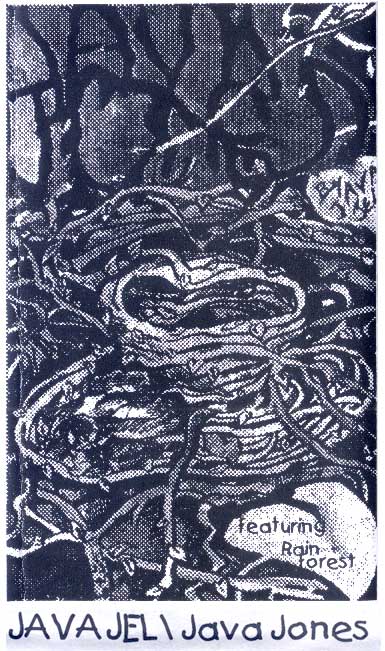 1996 – The 1990s continued with many projects brewing. including a recording session of Italian tunes with my mandolin-playing Dad; a live broadcast from Woodstock’s Tinker Street Café on WDST (a week before pop star-to-be Jewel appeared on the same program); and the release of “Java Jones”in 1996.

Cousin Christopher Gelsi did the enigmatic art for JAVA JONES.

The cassette tape of original songs included the song “Rain Forest” inspired both by The Partridge Family and the song “Nothing But Flowers” by Talking Heads.

A few years later, one of the moms at my kid’s nursery school passed the “Rain Forest” song over to some folks at WFMU, where it was featured on the show, Greasy Kids Stuff.

Some of the musicians I worked with at the time included Rich Morse on drums and others.

There were also a few gigs at the Baggott Inn in NYC during this period and a bootleg or two of some of those shows.