I am happy to report I have struck a licensing deal for Java Oreos. I am rich! For more sweet stuff check out my new album Java Jems…below!

Meanwhile here is an amusing musical thought from Maya G. What if the Beatles in a parallel universe were called the Eatles and sang only about food? Example: Pastrami in the Sky with Diamonds. Thanks for the chuckle, Maya.

Well, since we’re all home bound during this Covid-19 madness, I finally have a bit of time to share some stuff from my archives. Interesting enough, two of the tunes on here celebrate HOME life. We had the vision thing, no?

More is coming include my first all new recording since Javalicious in 2009 or so. Long overdue! Java Gems will be released here soon and hopefully on Spotify or something if I can figure it out.

The Ripe – play it here!

Robert McMullen wrote “Take me Away in a Basket” and “I Love My Home” and lyrics to “Mushroom and Flowers” and “Suburban Blahs”. Aku wrote “DFT”, which was originally recorded as a punk tune by his band PIPE in Santa Cruz. Java Jel wrote “Home I Love”, “Strawberries”, “Miss Ya Touch” and “Morning in America”.   But everyone had input into the songs. “Put Your Foot Down” is an adapted cover of an artist called N’Jagga from the Philly area in the 1990s.

Here’s Java Jel on vocals and guitar, Aku Tardiff on bass and vocals and Robert McMullen on drums and  vocals. We called ourselves The Ripe as a three-piece band in Jacksonville, Fla. in 1991-92 and also at reunion gig in NYC in 1998.

Bob Plokin joined us on violin in the studio in NYC in 1998 and played on “I Love My Home” and “Home I Love” quite nicely.  At the time the other guys said, what? A violin? But they agreed to give it a try. The result was great. Of course I gave Bob no direction whatsoever and only one take do everything. First thought best thought, as Paul McCartney says. Best not to overthink things sometimes. You did great Bob and if we ever record again, I will at least tell you what key it’s in.

Overall, it was always easy and fun playing with these guys and some of these tunes came out great. They’re all favorites but “Strawberries” always ranks near the top.

We recorded the tunes in a variety of spots: a home studio in Jacksonville in 1992 and live at the Murray Hill Theater in Jacksonville in early 1992 or 1993 or so for a farewell gig that stirred up a big crowd. We made some studio recordings in 1998 when Robert and Aku visited me in NYC when I lived in the West Village with my new spouse, Jennifer May.

The last song, “Take Me Away in a Basket” was recorded at Robert’s house in Avondale, Jacksonville. It’s one of my favorite sessions ever because Robert played the drums so gently we were able to just use an acoustic guitar with no amp.

“Motor Maxine”, is kind of a bonus track. Aku and I wrote it on one of my trips to California and I recorded it with drummer Gary Strauss and bass player Jesse Krakow at the Stolen Moments Studio in  Dobbs Ferry, N.Y. in 2000 or so. Kol Marshall produced that tune.

Thanks again to Aku for supplying the photo of The Ripe when we played live at The Baggot Inn in New York City in 1998.

Thanks also to Paul Ruest of Argot Network who deftly wrangled a variety of mediums including tunes on a video tape, some DAT recordings from the studio and cassette recordings to put together this digital master. Rock on! 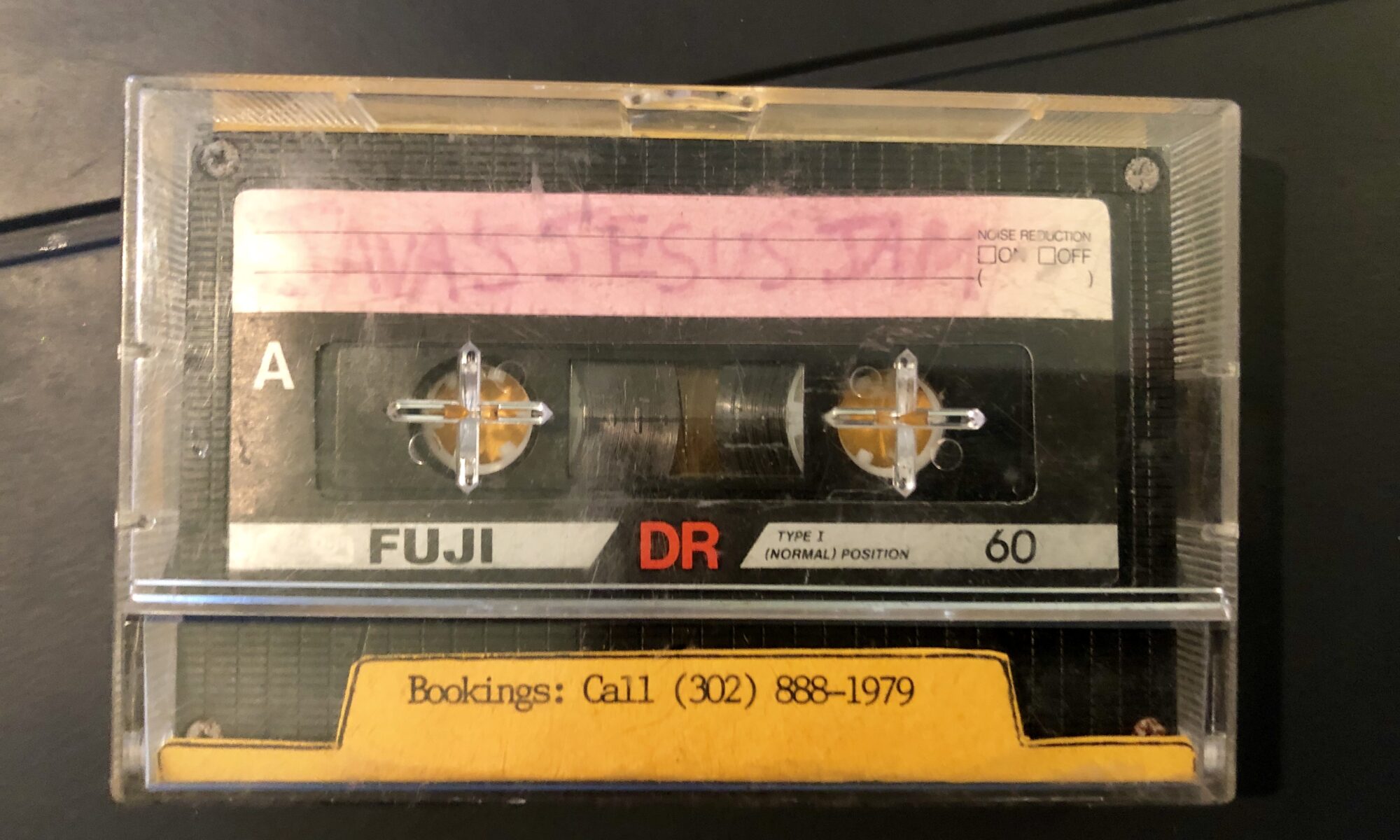 Here’s an email I got from a guy that came to see me 30 years ago at The Rat in Boston and got one of my home made mix tapes I was selling. He really liked the song UMCWB — Upper Middle Class White Boy.

I recorded it in November, 1988 in Astoria, Queens with Kol Marshall as part of the Java’s Jesus Jam EP project that included my stronger songs written during 85-87. It was my first studio recording ever.

The song did get played on once-hip alternative FM station WFNX-Boston at least twice from what I remember. But with no record label or publicity machine behind it, it didn’t make it into regular rotation. It’s a good song. Anyway, I’m really grateful for Tim to write below and share his Java story which now stretches into a new generation of caffeinated pop fans.

My 15 year old son recently found my copy of “Java’s Jesus Jam” deep in a box where I keep music.

He showed me the tape that I purchased from one night at the Rathskeller circa ’89. See pictures attached.  My good friend Lorie & I used to take in your show.  Had a blast…

I found your webpage and thought to drop you a note…we liked your music!  The lyrics to both Upper Middle Class White Boy & Kerouac Shack came right back to me.

My 15 year old (drummer) has his (garage) band working on UMCWB.
Thanks for the music.

Here’s my dad jamming in Germany with a mandolin he found during his time there in World War II.  Dad and mom always supported my music and paid for piano, guitar and mandolin lessons over the years.

My dad played mandolin all his life, including a trio with Frank LoPinto on guitar and Jack Mace on bass in Dobbs Ferry, NY, and the NY Mandolin Orchestra. He also studied at the famed Mandolin School in Rhode Island and rubbed shoulders with mandolin great David Grissom.

Thanks to Kol Marshall for recording and playing drums and bass…! 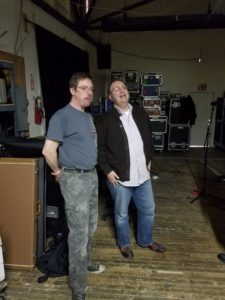 Great time hammering out some tunes with Kol and Joe.

The Guy With The Tie 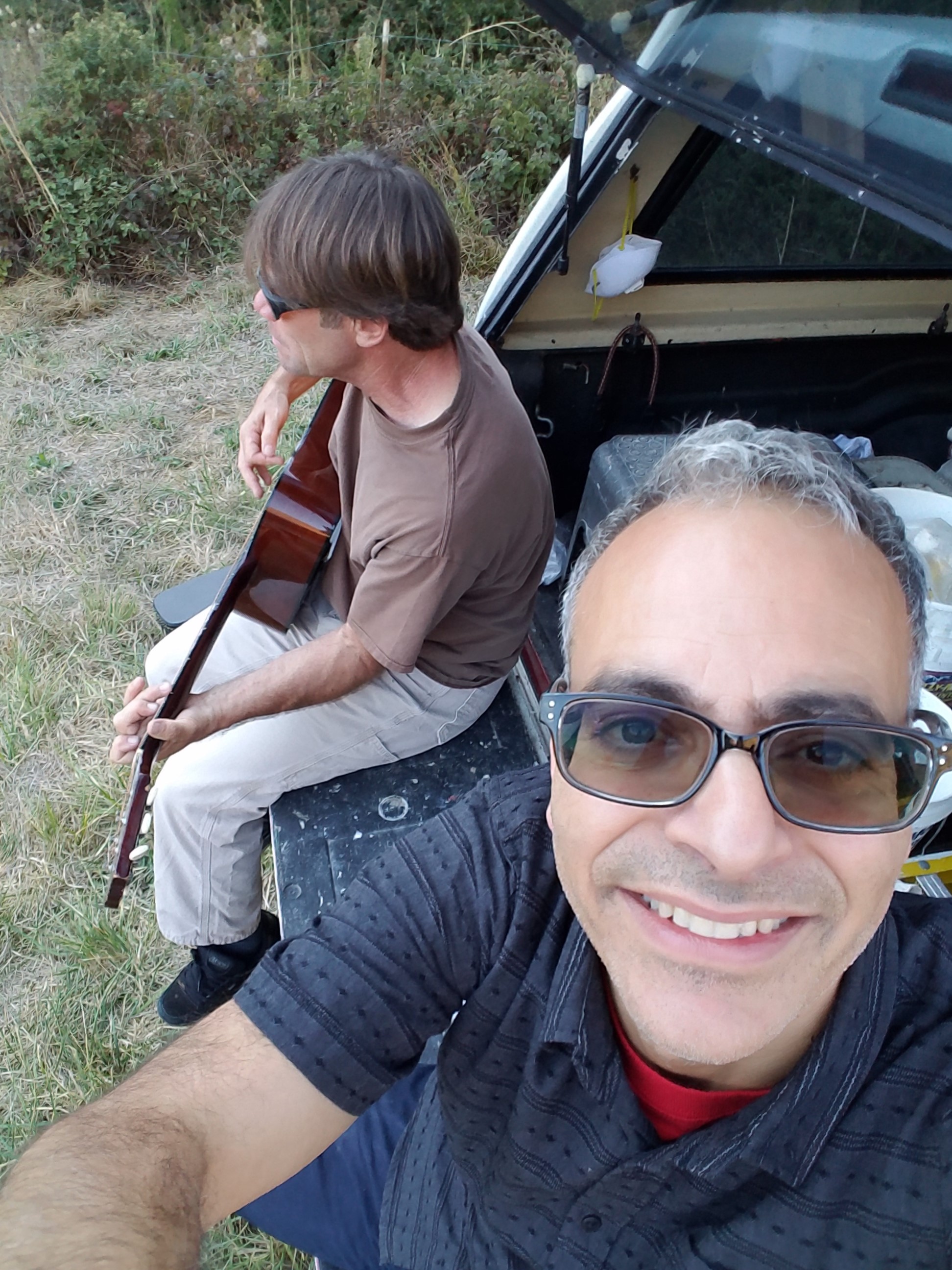 Here’s a picture of Aku and me in Pescadoro, California in October. We were working on a new song: