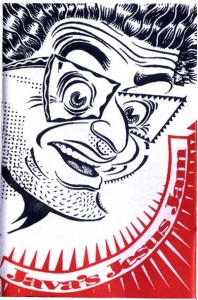 Wary of recording at first, I warmed up to it with producer Kol Marshall, who captured my vibe with the 1988 live solo studio recording, JAVA’S JESUS JAM. A collection of short street tunes with a couple of holiday ditties thrown in, the effort drew air play on Boston’s WFNX-FM radio. Many tunes from this recording, such as “Upper Middle Class White Boy,” and “I Wanna be an Existentialist,” were made and re-released later. The original “Kerouac Shack” recording, written at 3 a.m. in the Boston bureau of the Associated Press, is featured on FLAVORS.